July 15
Last night, the Greater Albany School Board fired Superintendent Melissa Goff in a special meeting that lasted under 30 minutes with no public comment and no explanation. Let's be clear, Goff led Albany Public Schools through a global pandemic with ever-changing state and federal mandates and expectations and many blamed her for things out of her control. She also worked hard to ensure that all of Albany's students had the resources and support in place be successful.
Instead of working with the Superintendent and finding common ground, the majority of the board voted to terminate her and fled out of the room.
This is not how government is supposed to work.
What happened last night did not "put kids first" as so many of the new board members campaigned on, but instead was done out of a desire for a cheap political win against the conservatives' new boogyman, Critical Race Theory, a Theory that most people can't even explain or define.
Equity work is important and touches our community in many ways. Whether it's making sure students on IEPs have the support they need, students who speak languages other than English have just as much of an opportunity as their English-speaking peers to be successful, or keeping breakfast and lunch available for families who rely on our schools to provide meals. This work will continue in spite of the new school board.
Jerred Taylor, chair
Linn County Democrats

July 14
The Greater Albany Public Schools Board of Directors asked me to not attend tonight’s special session. On the agenda was an item to consider dismissing me from my role as the GAPS superintendent without cause, effective July 24, 2021. Their vote confirmed this proposed action.
When new school boards are elected, they sometimes choose to move in a different direction than the board they replace. This is one of those times. It is why "no cause termination" language is written into superintendent contracts, providing new boards the opportunity to hire a district leader aligned with their approach and beliefs.
Though this Board decision is not what I had hoped for the future of our students, I recognize that the Board is acting within its authority to take this action. When I began as GAPS superintendent in July 2019, it was with a Board who sought an equity leader who could guide the district through strategic planning where all voices were heard. For two years, I had the pleasure of working with a fully supportive Board aligned with my beliefs in how to create a District in which all students and families thrived. I am grateful for the students, families, staff, and community members who have partnered with us in this work.
I believe our new Board has expressed a commitment to the priorities shaped by your voice. I look forward to seeing the progress in equity and inclusion, in student and staff emotional and mental health, and in academic rigor and relevance. As an Albany resident and committed community member, I will be there with you to celebrate these successes in the bright future of Greater Albany Public Schools.
— Melissa Goff 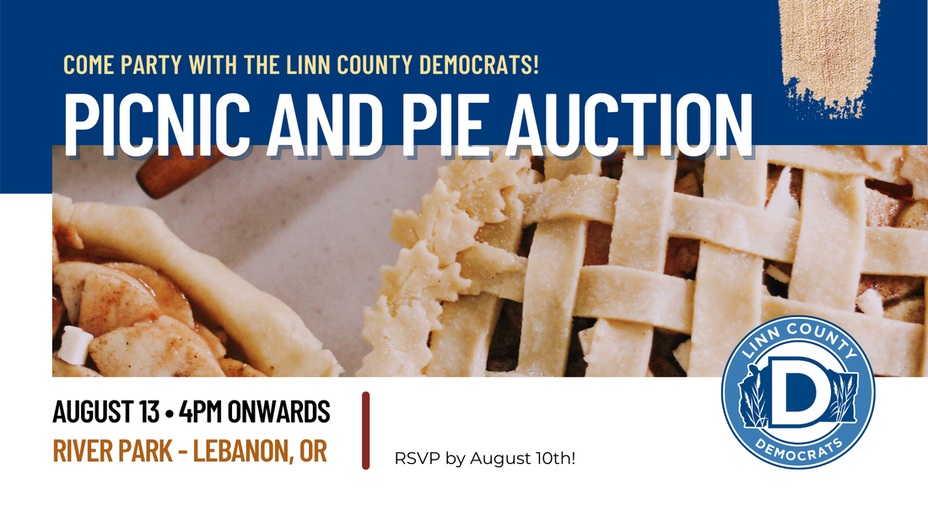 We are excited to welcome the return of in-person events with our fourth Picnic and Pie Auction in August. The event will be Friday, Aug. 13, at beautiful River Park in Lebanon. Come as early as 4 p.m..
As our tradition goes, we will accept donations of pies to auction off to attendees. Rumor has it there will be awards for best-in-show, best story, and more. All proceeds go to the Linn County Democrats to help us flip Linn County from red to blue.
Join us for some good summer fun!
Please RSVP by Aug. 10 so we know can prepare.
Click here to RSVP by Aug. 10

The Linn County Democratic Central Committee (LCDCC) of Oregon welcomes all those, regardless of party affiliation, who support our ideals. We’re an all-volunteer organization that works hard to elect Democrats to represent the people of Linn County at local, state and national levels. Our meetings are generally held on the first Thursday of the month. There will be no meeting in July. The next monthly general meeting will be a brief one held during our Linn Dems Picnic and Pie Auction on Friday, Aug. 13, at River Park in Lebanon. The event will start at 5:30 p.m.