'Taking away the right to abortion, as the majority does today, destroys all those individual plans and expectations,' the court's dissenters said and emphasized 'in so doing, it diminishes women’s opportunities to participate fully and equally in the Nation’s political, social, and economic life.'

'November 8 is our chance.
​Maybe our last chance' 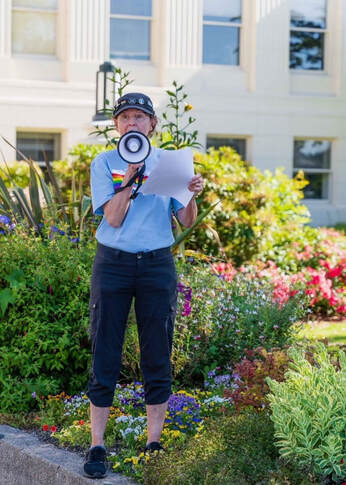 We knew it was coming – but that doesn’t make it any less shocking when it actually happens, right?
​
What is this decision about really? Yes, it is about women’s choice to obtain an abortion when needed. But it’s about more than that. Fundamentally it’s about controlling women. It’s an extension of a history of rape laws.

It’s about keeping women in their place. For much of history, rape was a property crime. Unmarried women were their father’s property; married women belonged to their husbands. If a virgin was raped, the damage was to her father; if a married women was raped, the damage was to her husband. If she wasn’t a virgin and was unmarried, there was no crime. The property was already damaged. A man couldn’t rape his wife as he owned her so had full rights over her body.

Rape of an enslaved woman wasn’t a crime. Even after the Civil War, rape of a Black woman wasn’t recognized as a crime. Keep in mind that Black Americans are always hit first and hardest when essential liberties are attacked. Think about the suppression of voting rights happening across the country, the lack of affordable healthcare, and now the loss of bodily autonomy.

Laws were intended to protect white men from false accusations, not to protect women from attack. Rape was seen as a natural result of human nature. Even in the 1970s, a defendant in a rape trial could present evidence that the women had previously engaged in sexual behavior so had not guarded her chastity properly – making it her fault she was raped.

Rape is a means of exerting patriarchal power. The current radical GOP is a backlash against the Civil Rights and Women’s Rights movements and an attempt to return to the time when powerful men didn’t have to worry about being accused by less powerful women.

States can now pass laws forbidding abortion even in the case of rape, which gives a man complete control over a women – he can rape and impregnate her, thus forcing her to be dependent on him.

Overturning Roe today is the first time the Supreme Court has made a decision that took away rights guaranteed to Americans. The majority on the Court are using originalist arguments to subvert the intention of the 14th Amendment – their aim is to remove power from the federal government and return it to the states. States’ rights – where have we heard that before?

We are lucky – for now – in Oregon. In 2017, Oregon Democrats passed the Reproductive Health Equity Act, one of the strongest abortion access laws in the country, codifying Roe v. Wade into state law and making the full range of reproductive health care services more accessible and affordable for Oregonians. After today’s decision, we could experience a potential 234 percent increase in people traveling to Oregon for a safe, legal abortion. Oregon House Speaker Dan Rayfield has formed a work group to make policy recommendations to protect reproductive rights in the state. But the future depends on elections.

The real story is about what this decision will do to women. The student who has an appointment tomorrow that will be canceled. The exhausted, pregnant young mother who is working long hours to support her children and cannot imagine how she will pay for another one. The woman impregnated by a rapist and forced to carry the child to term. The woman whose life is endangered if she continues a pregnancy.

The women who will have to give up their dreams, end their education, curtail their careers, and subvert their wills to someone else’s.

Today the issue is abortion. But it follows recent SCOTUS decisions about gun regulations, funding for religious schools, and Miranda rights. Next they will decide about environmental regulations. What do you think will come after that?  Same-sex marriage? Right to contraception?

Will today’s ruling lead us to activism or to apathy and defeatism? Will the majority – and remember we here represent the MAJORITY of Americans – mobilize? Will you organize to help get out the vote? We need a solid Democratic majority in Congress first to eliminate the filibuster and then to reform the Supreme Court.

November 8 is our chance. Maybe our last chance.

I’ll leave you with a quote from Sherrilyn Ifill, past Director of the NAACP Legal Defense Fund. She said this today:

​“Remember that we have never seen the America we’ve been fighting for. So no need to be nostalgic. Right on the other side of this unraveling is opportunity – If we keep fighting no matter what, take care of ourselves and each other, stay strategic and principled, and use all our power.”

The Linn County Democratic Central Committee (LCDCC) of Oregon welcomes all those, regardless of party affiliation, who support our ideals. We’re an all-volunteer organization that works hard to elect Democrats to represent the people of Linn County at local, state and national levels. Our meetings are generally held on the first Thursday of the month at Albany Public Library, 2450 14th Ave. S.E. and on Zoom. The next monthly general meeting will be at 6:30 p.m. Thursday, July 7.